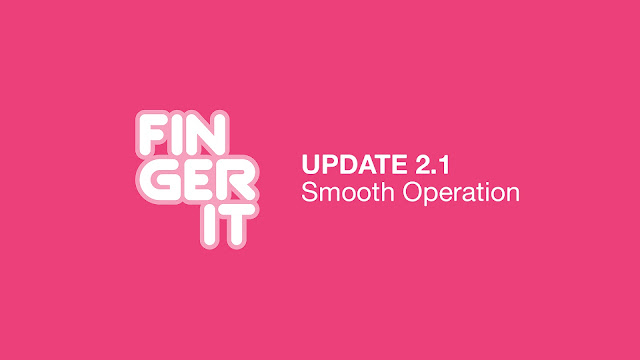 The thing is, a player said the sprites were a little bit "blurry" so we changed them, added a few lines of code and now the game runs at 200+ FPS and looks even better!

We are proud to announce the release of our first game: FINGERIT. But it’s not really the first game we publish…

The original name of the game was FINGER-IT! and we developed it in a 2 days challenge back in 2016. Since then, it has evolved to what it is now and we added some cool features, and deleted other ones not that cool.

After a few years of change in the studio and failed projects, we did a remake of the original game, renamed it and relaunched it under the new brand of the studio; resulting in FINGERIT.

We hope that you enjoy with this (old) gem of our studio as much as we enjoyed developing it.

This is our blog, here you can see the latest stuff about our studio and read all the news from our games.

(And yes it is made in Blogger because we don't have money to host it in a better place)
No hay comentarios:
Enviar por correo electrónicoEscribe un blogCompartir con TwitterCompartir con FacebookCompartir en Pinterest
Etiquetas: MISCELLANEOUS
Página principal
Suscribirse a: Entradas (Atom)